The origin of electric skateboards : It came out since one century ago?

Scooters were very popular during the period of the first war because of its low fuel consumption and providing people who cannot afford a car with a traffic tool.

The photos also show a series of well-known characters, such as British activist Mrs. Florence Norman and political commentator of women, who rode a scooter around London in 1916. 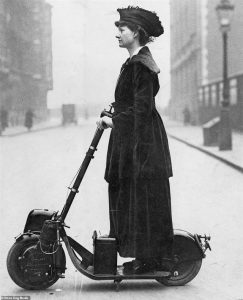 Some companies also attempted to try this strange facility, such as New York post office used it to deliver the post. 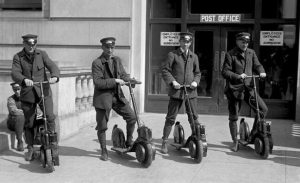 In 1916, four special delivery postmen at the U.S. Postal Service were trying out their new tool, a scooter, called Autoped. The image is part of a set of scenes showing the first motorized scooter upsurge more than 100 years ago.

Different people are using the tools in different ways. When criminals got the scooters, they became a tool for crime. For example, some gangs in New York used scooters to escape from the police.

It didn’t take a long time for an enthusiast to combine the latest technology of electric motor and battery reintroduced by Go-Ped to create the first prototype electric scooter design.

My project Way started as a garage in 2009 and now becomes inokim, one of the leading manufacturers of e-scooter.

Today, dozens of electric scooter manufacturers continue to innovate and introduce new useful functions and improve the standard rod. When there is demand, there is supply. There are many reasons why so many people like electric scooters.

Last but not least, electric scooters are more environmentally friendly. Although traditional mopeds and scooters usually consume very little fuel, they in some way emit 10 to 30 times more hydrocarbons and particles per kilometer than cars (with and without catalytic converters).

Now we can see why so many people are excited about this new trend of electric scooters, and why this trend will increase in the short term and remain timely.